skip to main | skip to sidebar

Posted by Joy Johnston at 11:37 AM No comments:

A new site presenting historical and family information, photos and documents, has been prepared by Roger White.  Click here for more detail.
Posted by Joy Johnston at 4:44 PM No comments: 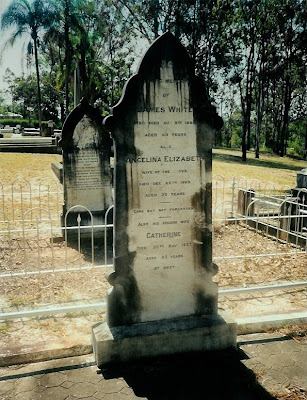 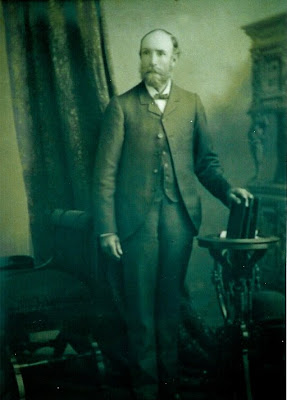 James White (1843-1895) came to Australia as a labourer. He had had enough schooling to be able to read and write, as he became Session Clerk of the North Pine Presbyterian Church.

The family lived in the Pine Rivers district, and their property was later acquired by Australian Paper Mills. The road leading to the APM factory is White's Road.

James and his wives are buried in the North Pine Cemetry (Lawnton), on the ridge south of the river, west of the railway bridge.
Posted by Joy Johnston at 2:45 PM No comments: 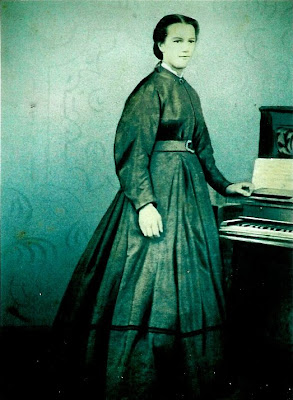 Our Grandma (Jane Eliza Harriet) White used to look at this photo of Angelina and say "Now there's a lady." Dad said Angelina's father was from a well to do English family, and was a doctor. For some reason he was sent to the colony with a 'ticket of leave' and a 'remittance'. Dad thought this could have been due to gambling or drinking. Having a ticket of leave meant that he had been convicted of some crime, and was transported to the colony, but remained free as long as he did not return to England.

This photo and other similar ones were displayed in our grandparents' home on School of Arts Road, Redland Bay. In 1988, when the old home was being emptied, Aunty Joyce gave our dad (Frank) the old photos in their large ornate frames. Frank (our brother) has the one with the 14 White brothers, and the two soldiers, Fred and Albert. There were six more, including the photos of James and Angelina, Frank (the first), William and Eliza Amelia Fielding (Grandma's parents), and Willie, Grandma's brother who died tragically when taken by a shark in Redland Bay in 1906. I am the guardian of the photo of Willie, and my five sisters have the others.
Posted by Joy Johnston at 2:43 PM No comments: 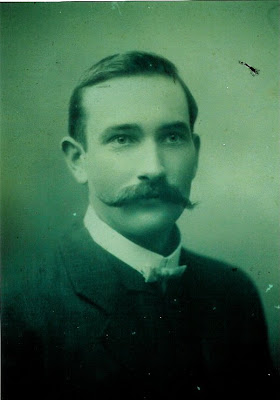 Frank White [b. 18/12/1879; d. 5/1/1951]
The following information was given to me by my father, Frank White, about his father, in January 1988.
"There was a mix-up in registering my dad's name. His older brother Uncle Bill was William Francis, and my grandfather forgot instructions and simply called my dad 'Frank'.
"Frank was a serious, studious boy and did well as school. His mother had died when he was young, and his father had remarried. The young men of the family were expected to find their own living by the time they were about 14, and young Frank was apprenticed to a churnmaker (making butter churns). However times were hard, and the man went broke, so Frank did not complete his apprenticeship. He then went to Beaudesert and worked in a dairy for a while, but subsequently became ill and returned to Brisbane.

"Frank then became a fruit hawker in the streets of Brisbane, carrying his fruit in a basket. His main area was Spring Hill, and he specialised in bananas as well as other fruit. He saw the need for controlled ripening of bananas, to ensure a good supply for sale. He developed the following method. He joined together two large cases (which had previously held dairy separator machinery - large enough to stand in). He bought unripe bunches of bananas and when he wanted to ripen them he put them in the container for a day or so, with a kerosene lamp burning. The controlled atmosphere he obtained produced evenly ripened bananas.

"Frank was able to improve his business, and he bought a horse and cart, became a 'fruit agent' and took a stand at the Roma Street Markets. The business continued to expand, and two of his brothers, Ben and Jack, joined him.

"However Frank's brothers did not share his Christian faith, and became a source of great concern to him. Jack's gambling habit got him into trouble, and he spent some time in Boggo Road Gaol. Frank became convinced that he should not be unequally yoked together with unbelievers, and sold his business to his brothers.

"Frank at this time spent his weekends preaching at street corners with the (strongly evangelistic) YMCA. He was Superintendant of the Ann Street Presbyterian Church Sunday School; had a beautiful Bass singing voice; and was song leader for the Brisbane part of the Alexander Chapmann mission.

"While still in the fruit business, Frank met William Fielding, who had a farm and a shop in Redland Bay. His daughter Jane caught Frank's attention, and one day they climbed together up the stairs known as Jacob's Ladder near the old Observatory [and close to the Holy Spirit Hospital where Dad died], read together from their Bibles, and prayed that God would show them His will.

"They were married, and bought a house in Phipps Street, East Brisbane. Phipps Street is still there, but the house is not. It was situated at a dead end of the street, and the council later resumed the land, and made the road go through the property.

"While still a fruit agent, Frank became associated with a Mr Wherry, who belonged to the Bretheren fellowship. It seems that it was at his instruction that Frank felt the need to disassociate himself from his unbelieving brothers. After selling his fruit business Frank became a partner-salesman with Mr Wherry in the furniture business. The shop was in George Street, about opposite McDonald and East.

"When the furniture business went bankrupt, the house in Phipps Street was sold to pay creditors. With no money, no job, a wife and three children he went down to Redland Bay to farm the property they named Mount Carmel.

"An interesting story is told from the time when the family lived in Phipps Street. Halley, the oldest, had been born in 1910, when Halley's Commet was visible, and the sky was lit up at night with a spectacular display of heavenly wonders. People did not understand that the earth was passing through the tail of the commet, and believed it to be a sign of the end times. Christian people held all-night prayer meetings, to be ready for the imminent return of the Lord.

"One morning Frank left home as usual, to catch the tram to the city for work. Halley, a toddler of about two years old, followed him and was not noticed by either of her parents. The twins (Frank and Frances) were young babies at the time. Halley eventually wandered into a hotel in the main street. The proprietor sat her on the bar and gave her a glass of soft drink. Her mother was visibly upset when she eventually found her there. The patrons didn't think it anything to fret about, and one man said to her "Don't worry, M'am. Her dad will be down soon. She must know the way!" Of course, nothing could actually be further from the truth.

"The house at Redland Bay, which became home for the family for the next 70 years, was owned by Mr Belcher. This man incurred large debts to William Fielding, for food bought at his store, and had severe problems with drinking and immorality. Grandfather Fielding bought the house in lieu of payment, and eventually bought the farm on which it was situated. The house and farm were managed by Frank, who bought it from his father-in-law over the ensuing years.

"William Fielding was quite well off, and sent his other three daughters to England for a holiday. He gave Jane 700 Pounds in lieu of the trip.

"Frank worked hard growing fruit: bananas and pineapples, then oranges and lemons. Later he added custard apples to his orchard. In about 1927 he became the first orchardist to try avocados, and became supplier to General MacArthur and the US army.

"Frank was always 'Mr White' in the Redland Bay community, and carried roles such as chairman of the school council."

Frank White died in 1951, and is buried at Redland Bay cemetery (front row of graves, on the left).
Posted by Joy Johnston at 2:41 PM No comments:

The White brothers from Pine Rivers 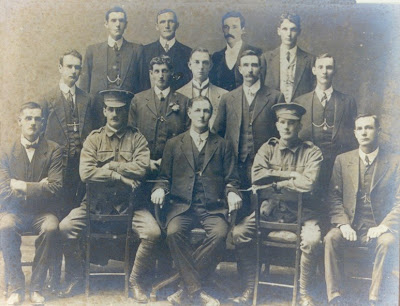 This photo was displayed in the old White home at Mt Carmel Orchard, School of Arts Rd, Redland Bay.
There is disagreement in lists as to who's who in this photo. I have listed them as my father (FWF White, son of Frank White) remembered his uncles in his later years. Another listing, shown here in square brackets[] is the one shown at the Heritage Museum.(L-R):
Back row: Ben, Bill, Sam, Walter [George, Walter, Sam, Ben]
Second row: James, Jack, Harry, Frank, Joe [Jim, Jack, Harry, Frank, Norman]
Front row: George, Fred, Norman, Albert, Charles [Bill, Fred, Joe, Albert, Charles] 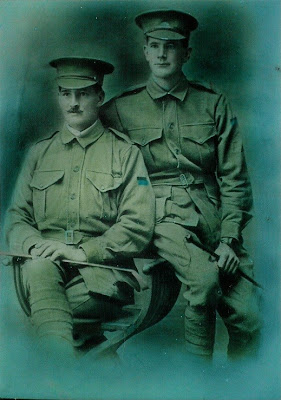 Fred and Albert White, who served with the 25th Battalion, and who were killed at Morlancourt on The Somme (France) on June 10, 1918 (source: PoliceBulletin 310, p31)

The following paragraph is from 'Pioneering the Pine', the display prepared for the Pine Rivers Heritage Museum 2008.
One of the most significant events in the upheaval and spreading of the family was WW1. Four brothers (Frederick, Albert, Walter and William) enlisted but only two returned. The tragic story of the deaths of Fred and Albert is known to many descendants. The elder Fred had served seven years in the Australian Light Horse and Mounted Infantry but joined the 25th Battalion Infantry in Sept 1915. Younger brother Albert joined the same battalion two weeks later. It seems that the brothers had conspired to serve together.

They saw considerable action in the war fields of France, both having suffered multiple wounds and illnesses. Within a few months of armistice, the 25th were engaged in the Battle of Morlancourt. On 10 June 1918, Albert lay wounded between battle lines. Fred crawled forward under enemy fire and dragged his younger brother back towards safety.

Sadly both were killed in machine gun fire as they neared safety. They remained in France, eventually resting in Beacon Cemetery, Sailly-Laurette.
Posted by Joy Johnston at 11:57 AM No comments:

This blog has been set up to collect and display historical information, documents, and pictures of the White family. The earliest ancestor for whom we have information at present (Nov 08) is JAMES WHITE, 1843-1895 who was a pioneer settler in PINE RIVERS QUEENSLAND AUSTRALIA. For a more extensive record of the family tree go to http://www.whitefamilytree.com.au/. This is a closed site. 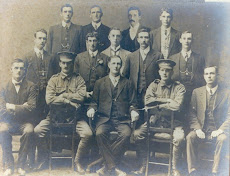